Where in Wales is Waterfall Country? 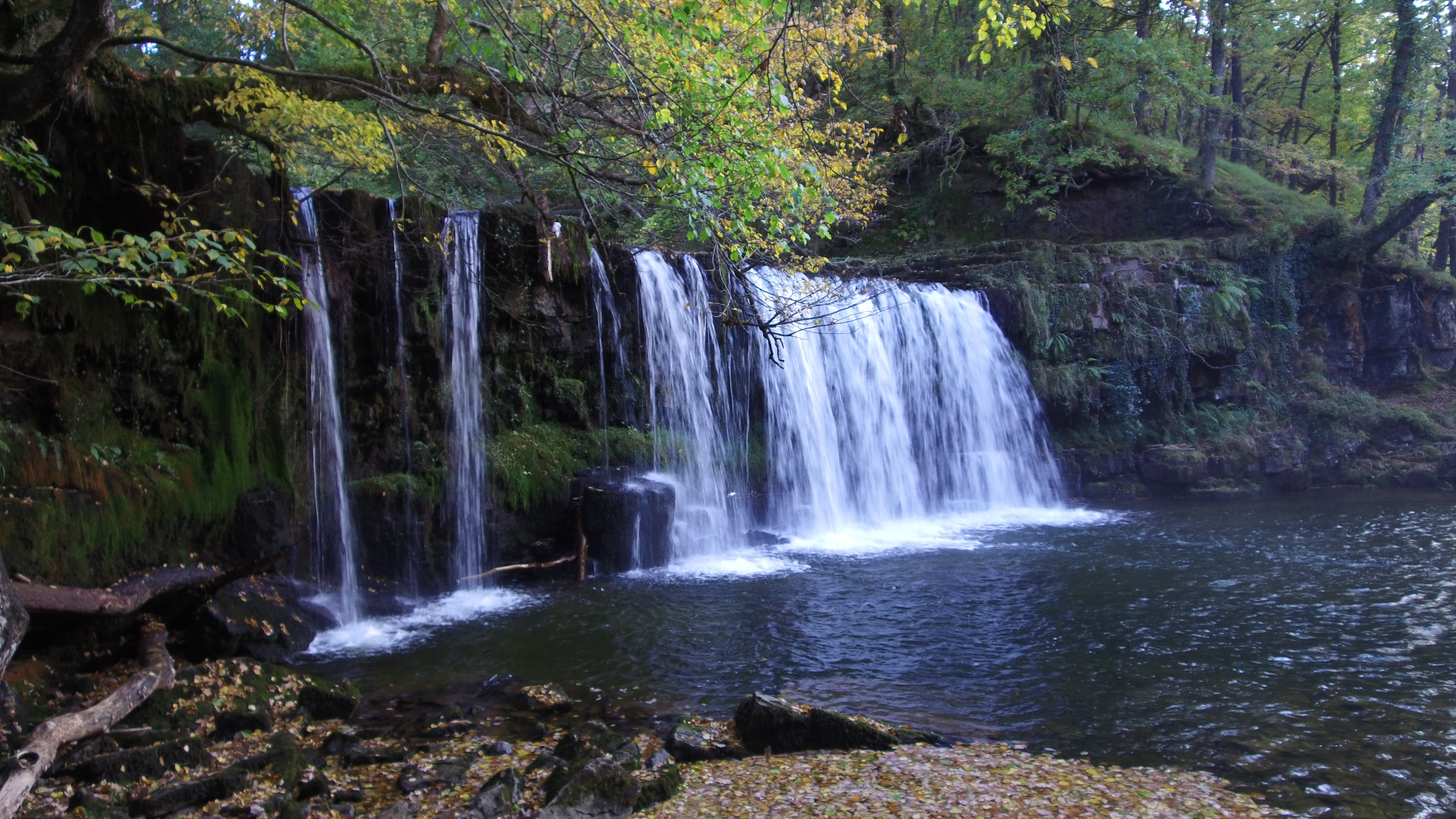 Many of you will have seen spectacular pictures of waterfalls in Wales on social media, with many citing Waterfall Country or the Brecon Beacons as the location, but where exactly is this mythical magical land? Its not on my map…

Waterfall Country loosely refers to an area in the middle of South Wales and encompasses part of the Brecon Beacons National Park and the northern extremities of some of the South Wales Valleys.

In years gone by, the term ‘Waterfall Country’ encompassed a triangle formed by the villages of Hirwaun, Ystradfellte, and Pontneddfechan. Here the geology has created a highly distinctive environment of wooded gorges, caves, swallow holes and waterfalls. This area which also is designated as a UNESCO Fforest Fawr Geopark is today described as the Heart of waterfall country.

The surrounding valleys also contain numerous waterfalls (including the tallest ones in South Wales) and today the term Waterfall Country is used to describe a much wider area which also encompasses the Swansea Valley, Vale of Neath and Blaenrhondda Valley. With the exception of The national Showcaves of Wales and Aberdulais Falls all are free entry.

The sources of the Rivers Mellte, Hepste, Pyrddin and Nedd-Fechan,  are in the red sandstone mountains in the eastern part of the Brecon Beacons National Park known as the Fans. Winding their through Waterfall Country they tumble through steep-sided, tree-lined gorges converging in the village of Pontneddfechan. There are four free Waterfall trails that start from the village, and via several link paths it is possible to complete a circuit taking them all in, although you’ll need at least 8 hours and a reasonable level of fitness to do so.

There are many free parking bays as you enter the village Pontneddfechan and three pubs.  The Elidir Trail entrance is located behind the Angel Pub. The other three of the trail heads are located next to Dinas Rock at the northern end of the village. Limited parking is available at Dinas Rock and the Village Hall so it may be best to park in the bays as you enter the village and take the riverside path to Dinas Rock (a 10 min walk)  A tearoom opens in the village hall on a friday & saturday.The area contains Sites of Special Scientific Interest and a Special Area of Conservation, Native celtic rainforest and over 200 species of mosses, liverworts, and ferns. It is also of historical significance, playing a big part in the industrial revolution, particularly in the production of gunpowder and mining of Silica Rock. Silica was a particularly valuable material which was used to make the fire bricks that lined many furnaces around the world. Dinas is still today the Russian word for firebrick. The last mine closed in 1964 after it suddenly flooded. Today with its crystal clear waters and mining relicies in situ, it is a popular location for underground divers from across the globe.

Adjacent to the the Mellte was the site of the Gunpowder works. Today the site is a tranquil wooded valley, rich in lush ferns and mosses and home to an amazing variety of bat species.  A pleasant stroll along the former tramroad reveals the curious ruins of buildings, tunnels, leats, weirs and waterwheels.  These are all that remain after the purposeful destruction of the site when the works closed in 1931.

As many of these structures were in a perilous state of decay, but recently the national park has undertaken  consolidation and conservation works as part of the  ‘Explosive Times Project’ funded by the Heritage Lottery Fund.

This area is one of the UK’s premier destinations for adventure activities and you’ll often find rock climbers, gorge walkers, canoeists and cave divers along the trails.

Due to the sensitivities you must use a qualified and authorised adventure company to participate in adventure activities. All the guides are qualified have undergone specific training and operate within a set of  rules to ensure environmental protection. Find a Adventure Guide here

The entrance to a fairy kingdom is reputed to be somewhere along the Elidir Trail, which takes you upstream along the easy path on the right hand side of the River Pyrddin to Sgwd Gwladus, the Lady Falls. The path becomes much more difficult after lady falls. To continue, double back to the bridge and bear left along the banks of the Nedd Fechan to reach Sgwd-y-Bedol (the Horseshoe Falls), shaped in several levels of semi-circular ledges. A little further upstream the water cascades over Sgwd Ddwli Isaf and Sgwd Ddwli Uchaf (the Lower and Upper Gushing Falls) which after heavy rain, truly live up to their name. From here you can continue on to the picnic area at Pont Melin-Fach or retrace your steps back to Pontneddfechan. This is a very popular and sometimes busy Trail. The second tallest (70ft) fall in South Wales, Sgwd Einion Gam (‘the fall of the Crooked Anvil’) is located upstream beyond Lady Falls, however it is very difficult to reach because there is no defined path to the waterfall, and the route requires several river crossings which may not be possible when the river is high.

One of the Wales most spectacular trails taking in the four famous falls, Sgwd-y-Eira – Waterfall of snow (The trail goes behind the waterfall!!), Sgwd y Pannwr, Sgwd Isaf Clun-gwyn and Sgwd Clun-Gwyn. Suitable for all, with great care and a reasonable amount of mobility, there are uneven paths and many, many steps.

Starting at the village hall, a fairly easy walk alongside the River Mellte to the site of the former gunpowder works. There is numerous buildings, bridges, and dams to view. A popular jumping spot for gorge walkers called loonies leap can be viewed from the wooden bridge.

Often missed by visitors. The lower trail is an all accessibility trail (suitable for wheelchairs and buggies) follows a wooded gorge contains some spectacular geology such as the spectacular limestone rock formation known as Bwa Maen. Its a 15 min walk to the end where the cascades provide a  dramatic back drop. To access the top part of the gorge (not all accessibility) you’ll need to double back and head up the side of Dinas rock following the Sgwd-y-Eira trail. It’s a steep 15 min walk before you take a link path that drops steeply into a deep ravine containing a picturesque waterfall that has a wooden bridge across it.

Travelling from Pontneddfechan into the swansea valley via the A4109 intervalley link rd, you will pass the highest (27 metres) and possibility the most spectacular of all the waterfalls in South Wales. Henrhyd falls located near the village of Coelbren is also known as the batcave locally due to its cameo in the blockbuster Batman: The dark knight rises. A short but steep path takes about 15 minutes each way from the carpark to the main falls. It is possible with care to walk behind the waterfall, but not after heavy rain when the gorge is a misty torrent. The falls located in a deep gorge sometimes can freeze in the winter. There are several other rarely visited falls along the nant lech trail.

Dan yr Ogof as it known locally is a huge cave system in the Fforest Fawr Geopark located in the Swansea Valley. The public are able to access around 1 km of underground passageways. There’s several impressive waterfall on the site including some underground in the spectacular Cathedral Cave which has been voted as Britain’s finest natural wonder. You’ll need a good few hours for your visit, and its a great place to visit on rainy days, with indoor attractions for all ages.

In the centre of Pontardawe, Swansea Valley, at the cross roads lies an assuming pedestrian square. Why there isn’t a big sign i will never understand, but proceeding down the path you will enter a 1km gorge, full of cascades, waterfalls, and impressive rocks. Whilst the falls are not huge, the gorge is very impressive, and being virtually unknown outside the town, it is very quite, with lots of wildlife. Visitors often describe it as a hidden rain forest.  Along with Glanrhyd plantation located above the gorge, were once the spectacular gardens of the of Glanrhyd House (which is now in ruins), a fine house that was built by local industrialist Arthur Gilbertson in 1878. The remains of the outdoor swimming pool, which is reported to have been the first one in Wales can still be seen. The site now a designated nature reserve and plantation contains a tree trail which has several important trees including some huge Giant Redwoods imported during the 18th century.

Melincourt Falls (Sgwd Rhyd Yr Hesg in Welsh) is a huge 80ft fall.  It is one of the easier falls to get to via a 15 minute walk through a 12 acre nature reserve. The path is fairly level and well maintained thanks to the hard work of the WildLife Trust who manage the site. Entry is free and there is a public car park and picnic area opposite the entrance on the B4434 road.

An interactive map of all waterfalls locations can be found here.

We have two holiday cottages located next to the Dinas Rock trail heads (see map below). Click on the links for details and to book. Waterfall lodge and Canyon cottage.

We also have three cottages Near Pontardawe in the Swansea Valley, Nant Cottage (with its own private cascades) Graig cottage (accepts pets) and Beili Glas Cottage.

Adventure holidays and group days in Wales have just got better, with a bit Read more »